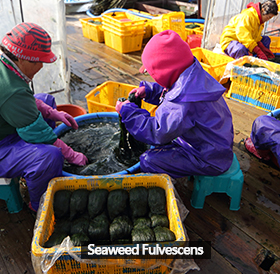 Delicacy of winter season as health food full of the aroma of sea
Seasweed fulvescens is the best delicacy of winter season produced only in the coast of South sea from mid December to late February every year. 'Maesaengi' is seafood grown only in clean sea meaning pure Korean for 'collecting fresh moss'. Although it was only available in winter, this natural food can be frozen to store all year round.

Environmental Conditions and Seaweed Fulvescens and Farming Status in Wando

Substances and Effect of Seaweed Fulvescens